By coffeepirates | 20/10/2017 | No Comments | Barista and Daily Work, Championships and Competitions

Hey! It’s Jess and I am going to tell you a little bit about my experience entering and winning the Cup Taster’s competition last January at the Vienna Coffee Festival.

Cup Taster’s Competition? There is such a thing? How does that work? How can you win a competition of tasting coffee?

A Cup Taster’s Championship is a coffee competition in which the competitor gets eight rows of
three bowls of filter coffee and using only their cupping spoon and their senses has to decide which coffee is the “odd one out“ of each group of three coffees. The coffees used in competition are usually very similar and might differ only in origin (for example two bowls containing a coffee from Ethiopia and the other bowl containing a coffee from Colombia one or even just which farm they come from (for example a coffee from one farm in Ethiopia and the other coffee would be from a farm in the same region).

The person who guesses the most amount of correct “odd one out“ coffees progresses to the next round. If the situation ever arises that the competitors guess the same correct amount of coffees, the person who did it in the fastest time wins.

It sounds quite simple but it can be very difficult to just use your sense of smell and taste to identify which coffee is different and which two are the same! After all of the competitors have finished the bowls are then lifted one at a time and the correct ones are marked with a dot on the bottom of the bowl. 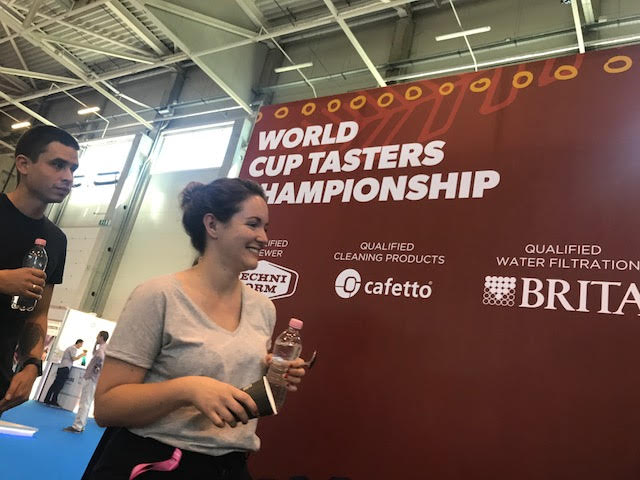 I entered the Cup Taster’s Competition last January completely for fun, not thinking I had any chance to make it past the first round, but I was curious to see how far I could go. It turns out I have a knack for cup tasting and ended up winning the championship which meant I would have the opportunity to go to the World of Coffee in June in Budapest!

After a few months of preparation (tasting, tasting, tasting!) that went by really quickly it was time for the Worlds. The World of Coffee was a three day coffee celebration and exhibition that took place in Budapest in June of this year. There was tons of coffee to drink and competitions to watch. I was competing with coffee lovers from all over the world for the title of “World Cup Tasting Champion“.

Although it was a world championship and tensions were high, it was a friendly environment and everyone was supportive of each other. The first round of the competition lasted a few hours as there were always only four competitors at a time. I spent the morning watching nervously and waiting for my turn. 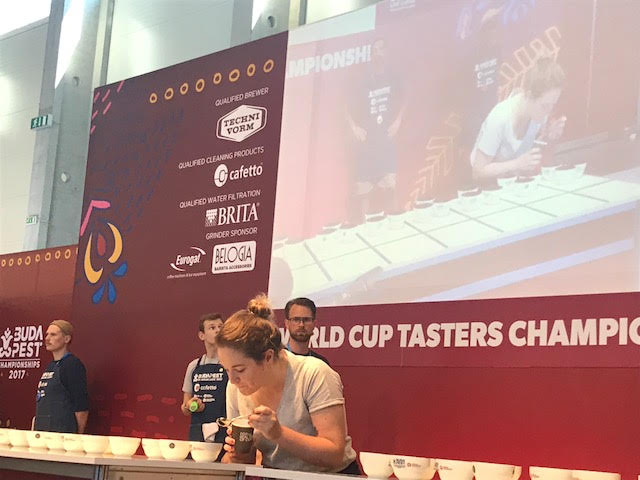 When my round came around, I was quite nervous but tried to trust my instincts while tasting. It was very exciting to be on an international stage ina competition that I didn’t even know exisited just a few months before! I got six out of right groups of coffees correct in 4:52 but unfortunately that wasn’t enough, as the competition was very tight and only the top 16 of 40 competitors made it into the semi finals (I was 20th overall). Only one person who got 6 out of 8 cups made it to the next round, the other 15 finalists all got 7 out of 8 or 8 out of 8 cups.

I was a bit disappointed that I didn’t make it to the semi finals, but to was a great experience to be able to compete in a World Coffee Event and it was an exciting competition to watch. This January the Vienna Coffee Festival will return to the Ottakringer Brauerei and I will try and defend my title as Austrian Cup Tasting Champion!